What a great show and fun time I had at Gold Country Gathering alpaca show. Well maybe I had such a good time because it’s probably one of the best showing I’ve had. I took the same 6 alpacas that went to AlpacaMania, Fantine, Amelia, Gypsy, Terra, Cora Lee, and Cosette. We took 2 Reserve Color Champion, 4 First Places, 1 Third and a 4th Place. Some of the animals we competed against were the same as last weekend but there were many new farms represented. I’m so proud of my girls. I also entered the fleece show and we did great there also. Amelia is the only one that did both shows,she got a 1st Place in fleece also.

Amelia is a suri alpaca, who’s fiber hangs in small pencil bundles that hang like dreadlocks. Amelia is the first suri I’ve ever shown. While I think she’s beautiful doesn’t mean she stacks up well to others. She held her own in both shows. Trying to prepare a suri fiber for show is really different than huacaya’s fleece. Didn’t really know what I was doing. Actually< I just pulled out vegetation and any short pieces and she did great.

OK so it is Halloween so I have Eeyore’s Ears on in the show ring, it’s allowed. 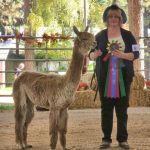 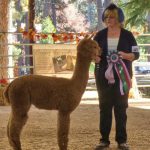 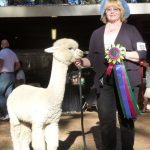 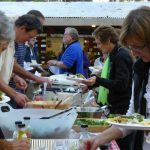