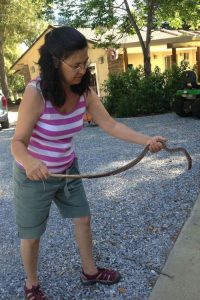 While the roses are beautiful this year this is the second year that I’ve had snakes. Yikes! I hate snakes! Have been here for 35 years and last year was the first snake year. The good news is this year the snakes have just been scary 2 gopher, one king and 1 rattler. Last year they were all rattlers.

The most amazing thing about the gopher snake yesterday is that it had gotten into my little chicken hutch where I keep my chicks until it’s “SAFE” for them to go out into the real world. The wire on those cages are 1inch by 1 inch on the sides and 1/2 inch by 1 inch on the bottom. The snake was WAY bigger than that. Goes to show how much I know about snakes.

Well this gopher snake was attempting to eat one of my chicks. Guaranteed it would not have gotten out to the hutch with that fat belly. Well it didn’t get out alive. I hate snakes but deal with them. While I was catching the first offender, I saw a second one slither past between the floor and the wall. OMG! There were 2 of them. At first I though it was a rattler but was just a slithering gopher snake.

The long and the long of it is I caught both and they were BIG the small one was just over 3 feet and the second one was over 4 feet. 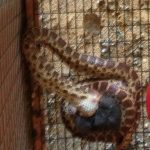 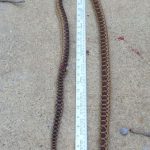