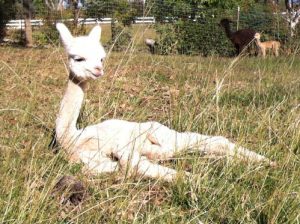 Daisy was born, at a friends farm, to a first time mom who rejected her. I don’t mean she just was a little slow in figuring out motherhood. She would NOT let Daisy nurse. The farm tried diligently to bond the mother and daughter. The vet suggested drugging the mom and putting her into the twilight zone. They tried this for days. They followed the vet’s instructed and increased the dose until the mother was so out of it she was staggering around. That is until Daisy tried to nurse. Then she came to and was out of there. This went on for about 2 weeks. They also attempted to graft Daisy onto one of their other nursing dams with no luck. Daisy did get pretty good as snitching a suckle. The finally decided just to make Daisy a bottle baby. Actually Daisy was a bucket baby but that’s a different story.

The part that broke their hearts was at night when the herd kushed. The mom’s and crias kushed side by side. Then there was Daisy all alone with no one to cuddle up to on those cold nights.

So you ask how does that have anything to do with me. Well that’s the rest of the story. One day I was out I the pasture with my new mom’s and crias. I was petting, new mom, Elpahba. Her daughter, Cosette was standing in front of us. Elphba turned around to see another cria nursing on her. She just turned back looking at her daughter without a care. I immediately got on the phone to my friend saying get Daisy up here, it looks like Elphba might let her nurse.

Daisy arrived and we put her under Elphba. Elphba was a little reluctant but with a minimum of head holding she stood and let Daisy nurse. Yahoo!! This might work. After a few short sessions holding Elphba’s head she accepted Daisy. It was so heartwarming in the morning to go out and see Daisy kushed next to her new family.

Daisy and her “sister” Cosette are now about 4 months old both are about 50 pounds. Mom is doing great and easily is providing milk for both her girls. 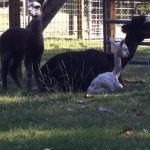 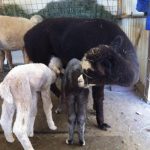